It appears that your cart is currently empty!

I Had a 15-Minute Call about Tantrums with a Parenting Expert. Here’s What I Learned.

Our 3 year old daughter has been having at least one tantrum per day. Our whole family, including our extended family, has been suffering as a result. After late nights googling things like “how many tantrums is too many” and “how to know when toddler tantrums indicate a mental disorder,” I decided to finally follow a friend’s advice and dig into the writing of parenting coach Vicki Hoefle.

Vicki’s approach is rooted in Adler’s Individual Psychology, and is summed up by “less is more,” meaning we as parents need to focus on controlling our own behavior rather than micromanaging our children’s.

Through her website, I set up a 15 minute phone consultation with Vicki. I learned about a year’s worth of gold in that time.

I liked Vicki immediately. She had a warm chuckle that made me want to ask her for a hug. After we briefly connected and shared a little laugh, Vicki asked me to start off by giving her a peek into why I’d called. I told her that we’d just moved our three kids -- a 6 year old boy, 3 year old girl, and 10 month old baby boy -- across the country, away from their friends, schools, and the nanny who’d been in our lives for 6 years. I told her that my reason for calling was my daughter’s daily tantrums and that our older son seemed to be adjusting well.

Her first question startled me:

“So what’s your son worried about?” Mentally, I retreaded what I’d shared: “Maybe I did say something about our son being easy to read, open with communication…did I actually just say that our son is the easy one, and Arabella is difficult? Ugh, I did.”

I answered by telling her that our son is angry with his sister for his tantrums, complaining that they keep him up at night.

“Watch that,” she answered. “Tell him to pop in earplugs at night. Tell him that he needs to think of ways that he can help his little sister. Sounds like your son is playing right into the family dynamic that he’s the good kid, and she’s the problem.”

I told her that we’d been focused on acknowledging George for making his transition bravely and for being so pleasant and cooperative. Her response: “That’s fine, but kids who are discouraged need acknowledgment. Your daughter needs acknowledgement.” 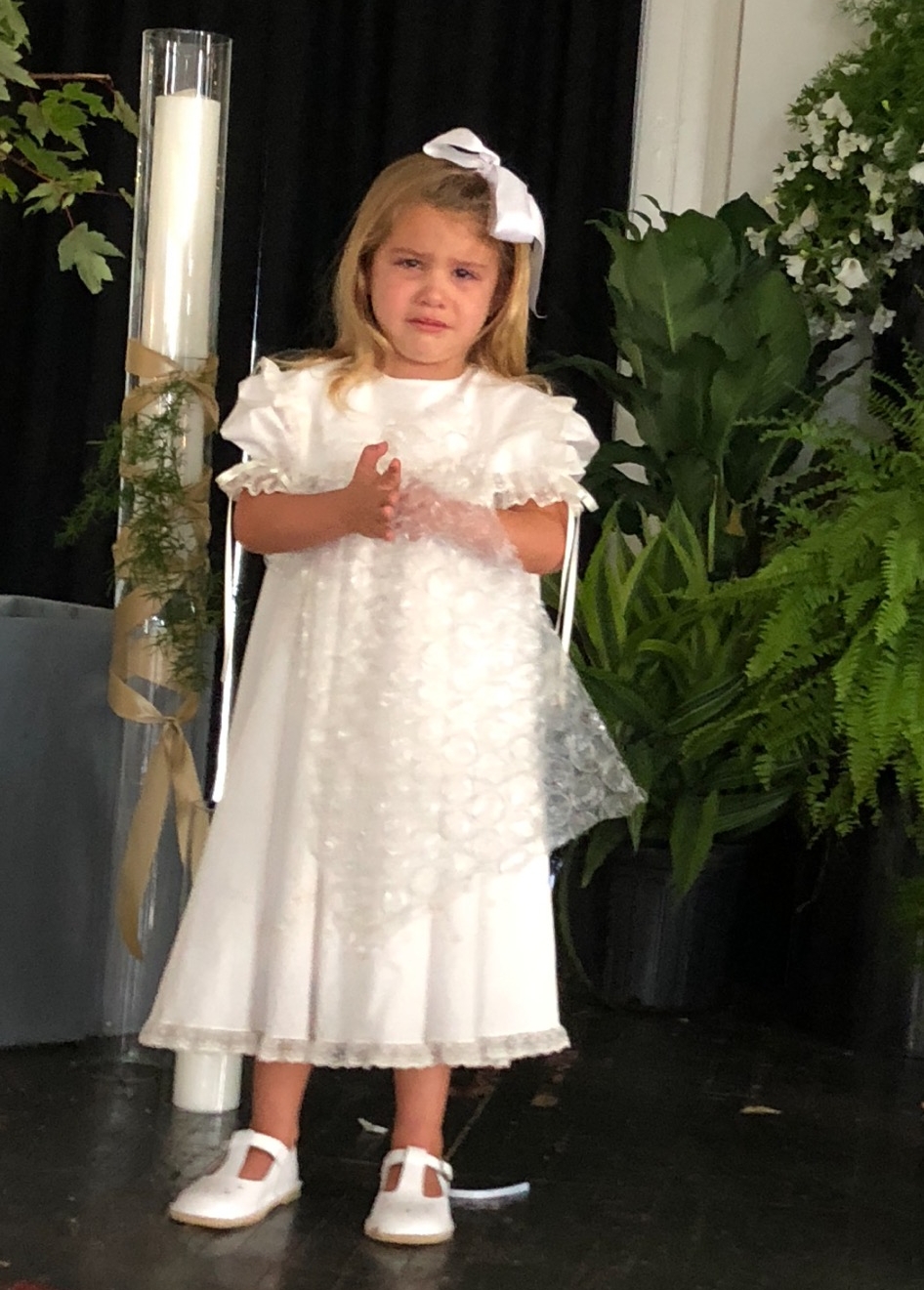 As for Arabella, she told me that she’s dealing with a lot of emotions, and that we should acknowledge her for only having 1 tantrum per day after all that she’s lost and all that’s being introduced to her. “I wouldn’t be surprised to hear if she’s having 6,” said Vicki.

I was immediately flooded with both relief and empathy for Arabella. My instinct has been telling me that the consequences I’ve been enforcing for her tantrums were a mismatch. Don’t get me wrong; I eschew a lot of the modern permissive, talky-talky parenting, and I think rules and limits are important for kids to feel safe. However Vicki affirmed that, in this case, our daughter needs support, not stricture.

I was immediately flooded with both relief and empathy for Arabella. My instinct has been telling me that the consequences I’ve been enforcing for her tantrums were a mismatch.

Here's how her advice boiled down for me.

When Arabella starts to rev up, and I know the cues, I make eye contact with her, tell her that I can see she needs some support, and ask her to participate in something with me. This morning, I’d put this into practice without realizing it, and it was our first tantrum-free morning since we’ve moved. I heard Arabella groaning to her dad, so I went to her and reminded her that we’d bought pumpkin to make pumpkin pancakes. I asked her if she wanted to help me make them. One key here is that she and I teamed up on something that I was going to do anyway -- make breakfast. Vicki emphasized that supporting an overwhelmed child isn’t about field-trip style quality time; it can be about really connecting with your child for 2 minutes every hour. It’s also about helping them see their role and importance in the family and its normal routines.

She cautions that we often pay way too much attention to the things that drive us nuts (tantrums and whining especially) and can get past that behavior by starving it. However, with a child that’s endured a lot of change or is going through some kind of transition, our role isn’t to ignore but to support the root of the emotion.

How about when a child is in the throes of a tantrum?

Her advice was for me to connect heart to heart, literally. I’ve read a lot about holding or hugging a child who’s having a tantrum, and it doesn’t work for me. But Vicki’s advice was to make the connection by sitting together, putting my hand on her heart, acknowledging what she’s going through, trying to help her regulate her breathing. If she’s still out of her mind or is having a tantrum just to get what she wants, I can simply tell her that her tantrum will not change the outcome: I’m not going to change my mind. Then I just continue doing whatever else it is that I need to do. Firm but kind, do not lose your temper, do not model the behavior you don't want to see.

With a child that’s endured a lot of change or is going through some kind of transition, our role isn’t to ignore but to support the root of the emotion.

I’ve been concerned that there’s so much yelling at home, primarily from his 3 year old sister. Vicki reminded me that only I know that Beau could have had it any other way. A third sibling can never be a first child. She also reminded me that I can tell Beau “your sister’s having a hard time with school; she’s having a lot of feelings.” An important shift away from my usual “Arabella, please stop. You are upsetting the baby.”

In the end, Vicki told me that she usually recommends a coaching plan on this initial call but felt like I was in good shape and had good instincts. That felt like the hug that I’ve been needing through this transition, and she may have just staved off my tantrum tonight.

Back to Inspiration and Advice